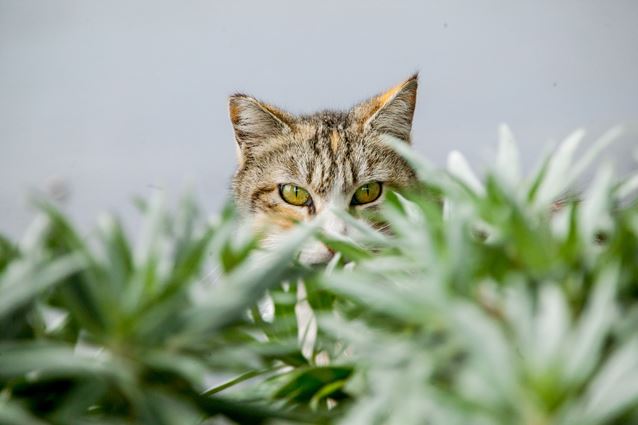 I have a cat with three legs. It lost the right hind one when young, after a failed attempt to take on a cyclist. Fortunately, it doesn’t seem to have incapacitated him in any way. Mr Tibbs can still catch the odd mouse and climbing up walls doesn’t seem to be an issue, even though he’s getting on in years.

When my cat is home, it has a limited set of needs. Somewhere comfortable to sleep (something Mr Tibbs enjoys doing a lot of) and food. As a non-paying lodger, he’s low maintenance.

What he gets up to when outside, however, is another matter altogether.

First of all, there’s the small issue of other cats in the area. Mr Tibbs, like his neighbours, is territorial – woe betides any kitty that infringes across the boundary line, however innocently. Despite his age, and the fact that he only has three legs, Mr Tibbs is a fearless protector of these territorial rights. He’s fought with younger and much more agile foes across the years and successfully managed to send them packing.

Every so often, he’ll saunter back into the house with a few cuts on his nose, a nick around the ear or a bit of fur missing. This seems to make him happy. There’s always a look on his face as if he’s reassured about his place in the world.

I’m convinced that, when Mr Tibbs goes out, he’s travelling much further afield than I like to think. While his personal territory is important, that doesn’t mean he can’t head out to new pastures and explore further afield. For instance, one area that appears to be a constant attraction is the railway track opposite our house – a sprawling wonderland of heavy undergrowth. The perfect place to hunt as it’s home to numerous unsuspecting mice.

I’ve often thought of fitting a cat tracker to Mr Tibbs, so I can follow him on one of his jaunts out. One day, maybe, I think I might just do that.

Back on home turf, Mr Tibbs will sit at the edge of this area, particularly at night, watching and waiting. Like most cats, he seems to possess a high degree of patience. He won’t go in for the kill until he is certain something is there and he’ll crouch or sit quietly while he surveys the land.

Then he’ll creep into the undergrowth, sometimes disappearing for hours. Most times he’ll emerge without a prize. On the odd occasions that he does find a less than fleet footed mouse, he’ll toss it idly onto the road, tap it with his paws and play with it for a while. Before leaving it and heading home for a rest, his job for the day done.

The back garden is full of birds but Mr Tibbs seems to have given up on these. Everything from blue tits and goldfinches fly in and out with reckless abandon. Even the pigeons now get a free pass. The only thing that piques Mr Tibbs’ attention nowadays is the grey squirrel that occasionally pops in to avail itself of a container of nuts. The squirrel is far too fleet of foot and too high up in the apple tree.

Most of the time when he isn’t hunting, Mr Tibbs can be found resting in a sun spot. He has two or three favourite locations, including my neighbours’ extra soft door mat and all of which are relatively close to home.  He is a cat with simple tastes and I often think that the odd scrap with a local interloper is all he needs to confirm his place in the world.

He is undoubtedly a creature at one with the world and happy with his lot.

Keep tabs on informed on products, news and offers so you know your cat will always be safe and found.

ALL United States Orders Must Be Placed Via - https://www.tabcat.com Dismiss